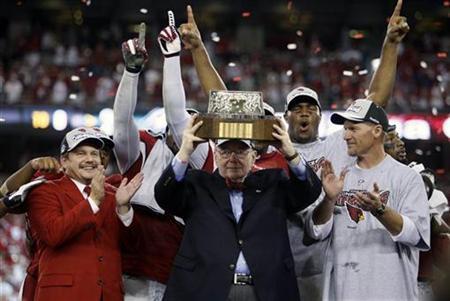 Something spectacular like the Super Bowl is no doubt what the late Charles Bidwill had in mind on his yacht that night in 1932 when he made a deal to buy a football team from David Jones.

Bidwill, the flamboyant Chicago sports entrepreneur, would have loved the idea of his team, the Cardinals, someday playing in the NFL's ultimate extravaganza, Super Bowl XLIII on Feb. 1 in Tampa.

But it would have crushed Bidwill to think the team would have fled his beloved Chicago long ago as the Cardinals prepare for the biggest game in their history.

The Cardinals were born on the South Side, at 52nd and Morgan streets, in 1898, known as the Morgan Athletic Club. They would prove to be migratory birds, calling Chicago, St. Louis and Arizona home before their ascent to 2009 glory, something Bidwill could not have envisioned the night he proposed buying them on his yacht, the Ren-Mar.

He was a man about town whose circle of acquaintances ranged from Al Capone to George Halas, and the guest list for the informal dinner party Bidwill and wife Violet threw that night included Halas, Jones and Tribune sports editor Arch Ward, a journalist/promoter responsible for baseball's All-Star Game, among other ventures.

Not surprisingly, football entered the conversation. Jones complained that the team he had bought three years earlier from its financially depleted founder, Chris O'Brien, was a draining investment he wanted to unload. A handwritten agreement lists the purchase price as $12,500, but Halas and others later were quoted as saying it was $25,000.

Bidwill was interested. As the story goes, they settled on a price of $50,000, and Bidwill sealed the deal with $2,000 down and a handshake.

Jones agreed to stay on as Cardinals president until Bidwill unloaded his Bears stock -- he was an investor who had made a few loans enabling his pal Halas to meet payrolls.

"The new boss of the Cardinals is now perhaps the city's most active athletic figure," Ward wrote in the Tribune. "Bidwill is president of Chicago Stadium Operating Company, which has exclusive rights to promote boxing, wrestling, bicycle races and kindred events in the world's largest indoor arena. He also is ... a proprietor of a racing stable, and secretary of the Chicago Business Men's Racing Association, which controls the Hawthorne track."

With Bidwill overseeing the operation, the Chicago Business Men's Racing Association ran Hawthorne Race Course from 1924 to 1945. He also was a co-owner of dog tracks in Miami Beach, Tampa and Jacksonville, and in the 1940s he started a women's professional softball team, the Chicago Bluebirds.

His biggest move outside football -- one that would have ramifications for the Cardinals ownership -- came in 1932. The Illinois legislature outlawed dog racing in the state, and Bidwill was part of a National Jockey Club group that took over a dog track Capone had operated in Cicero. The facility was converted into a thoroughbred track and reopened as Sportsman's Park.

While Bidwill's racing interests flourished, his football team did not. Bidwill brought the Cardinals back to the South Side in 1940 after they had shared Wrigley Field with the Bears for nine seasons, but the change in venue didn't reverse the team's fortunes. The Cardinals' 6-5 record in 1946 represented their first winning season since 1935.

They broke through in 1947, going 9-3 and winning the NFL championship with a 28-21 victory over the Philadelphia Eagles in the title game at Comiskey Park. But Bidwill didn't live to see it. Without leaving a will, he died of pneumonia on April 19, 1947, at 51, and Violet, his widow, took over the team.

At a board of directors meeting in summer 1951, Charles W. Bidwill Jr., an outgoing, 23-year-old Georgetown University law student known as Stormy, was named the Cardinals' president, and his somewhat reticent brother Bill, 20, was named vice president.

But the sons of Violet Bidwill were figureheads. Wolfner continued to run the team, and in a manner that alienated Halas. When Wolfner tried to move the Cardinals to Northwestern's Dyche Stadium in 1959, Halas blocked him, citing an old territorial agreement calling for the Bears to play on the North Side and the Cardinals on the South Side.

As early as 1954, there were rumors Wolfner was exploring the possibility of a move, and groups in Miami, Houston, Atlanta and Buffalo were said to be interested.

Wolfner denied the relocation rumors and it seemed the Cardinals were staying in Chicago after he cut a deal with the Chicago Park District to remodel Soldier Field.

The massive lakefront facility became the Cardinals' home in 1959, although they played only four home games there and two in Minneapolis.

Then in March 1960, the NFL granted Wolfner's request to move the Cardinals to St. Louis.

The team's financial problems had grown so severe it had trouble paying visiting teams their guarantees, which had increased to $30,000 from $20,000. In addition, CBS Television exerted substantial pressure on the NFL to make Chicago a one-team city.

According to NFL blackout rules in effect then, the network was unable to televise Bears road games back to Chicago when the Cardinals were playing at home, and vice versa.

Two years after the Cardinals left the city, Violet Bidwill died suddenly, touching off a bitter court battle for control of the team.

Wolfner contested her three-page handwritten will, which left the bulk of her estate to her two sons and gave him only the income from five Oklahoma oil wells, estimated between $250 and $400 per month.

In Cook County Probate Court, Wolfner not only revealed that Stormy and Bill Bidwill were adopted, he asserted the adoptions were illegal, shocking the brothers who had grown up believing Charles and Violet Bidwill were their biological parents.

Probate Court Judge Robert Jerome Dunne, however, ruled the adoptions were legal. After the Illinois Supreme Court upheld the ruling, the dispute ended with an out-of-court settlement.

The Bidwills regained control of the Cardinals, and Stormy ran them. But the co-ownership arrangement strained the brothers' relationship and Stormy sold his share of the team for a reported $6 million, making Bill, who had moved to St. Louis, the sole owner and operator of the franchise. The family still has a stake in Churchill Downs Inc. and in dog tracks in Florida.

"His idea of how to run the team and mine were different," Stormy once told the Tribune in a rare public comment on the rift. "The leaving wasn't easy for either of us."

Stormy continued to reside in Winnetka and oversee his racing interests. His son, Charles Bidwill III, took over Sportsman's Park in 1995. The track is now defunct and in the process of being demolished after an ill-fated attempt to make it a combination auto track/thoroughbred/harness facility. The family still has considerable racing and casino interests.

The Cardinals made only three playoff appearance in 28 years of St. Louis residency, and Bill Bidwill moved them to Arizona in 1988.

They continued to struggle on the field and at the gate as tenants in Arizona State's Sun Devil Stadium, but in 2006 they moved into University of Phoenix Stadium in Glendale, Ariz., a state-of-the-art facility that was host for last season's Super Bowl and has been cited by BusinessWeek as one of the world's top 10 sports arenas.

Bill Bidwill remains the Cardinals' owner, and his son Michael has succeeded him as president. The team Michael's grandfather acquired for $50,000 in 1932 is valued at $914 million by Forbes magazine.
Posted by LCDR G. Smith (Ret.) at 6:00 PM