The History of the Football Cardinals

Back in 1899 when the rising cost of gasoline wasn't nearly as much of a concern to the average commuter as were the price of horseshoes and oats, the game of football was dramatically different than it is today. There were no multimillion-dollar contracts, television cameras, (the bloated sack of protoplasm that is Chris Berman was not annoying America and Fox had yet to assault us with obnoxious graphics and sound effects) or domed stadiums. Instead, the old-time players waged the 100-yard war on dusty gridirons bordered by hardwood benches and rickety bleachers.

Players of that bygone era had a pioneer spirit about them and didn't bat an eye at playing eight games in ten days, wearing the same uniform every game. Players only got paid if fans showed up; if the fans stayed home - well...at least the players would get a hot meal and the satisfaction of knowing they had given all they had playing a game they loved.

The Chicago Cardinals started out in 1899 as the Morgan Athletic Club, a neighborhood team in the rough Irish section of Chicago's South Side. When team owner Chris O'Brien moved their headquarters to Chicago's Normal Field, their name was changed to the Normals. Several years later, O'Brien had the opportunity to buy some second-hand jerseys from the University of Chicago. The bright maroon color of the jerseys reminded O'Brien of an especially ill-tempered bird, and the team's name was changed to the Cardinals. In 1920, O'Brien bought brand-new uniforms for his team and entered them in the American Professional Football Association.

That same year, he persuaded John "Paddy" Driscoll, the sensational halfback, to play for the Cardinals for $300.00 a game. That was practically a fortune at that time, and Paddy proved to be worth every cent. Blessed with the ability to run like a gazelle and blocked like a steamroller, Paddy could snatch victory from the jaws of defeat with his booming drop kicks. In a 1920 game against the cross-town rival Chicago Tigers, Paddy scored the only touchdown in a game having a pro-wrestling like stipulation that the loser would leave town, dropping out of the league and leaving only one team to in Chicago.

Had it not been for Paddy's sensational 40-yard touchdown run, the Chicago Cardinals, and their subsequent iterations in St. Louis, Phoenix, and Arizona would have never existed, and this website would be considerably shorter.

In 1925, Paddy and the Cardinals beat the tough Pottsville Maroons for the NFL Championship. However, in spite of their success, the Cardinals were in dire straits financially, and the following year Chris O'Brien was forced to sell Paddy to the Chicago Bears. The Cardinals slipped to 10th place without their star halfback, and attendance plummeted accordingly. Apparently, fair-weather fandom is nothing new on the South Side of Chicago.

In 1929, O'Brien accepted an offer of $25,000 from Chicago physician David Jones to purchase the Cardinals. Jones' first order of business was to convince Ernie Nevers, the All-America fullback from Stanford, to join the team. Pop Warner, who had coached Nevers as well as Jim Thorpe, was of the opinion that Nevers had a better temperament for the game than did Thorpe. Nevers stood 6'1" and weighed 210lbs, with much of his weight centered in his thighs, flanks, and calves. His running style was a combination of speed and ferocity that showed signs of neither pain nor surrender. While at Stanford University, Nevers injured one ankle and broke the other, but refused to stay on the sidelines. Playing with a homemade aluminum splint, Ernie gained 117 yards on 34 carries.

Like many players of his era, Ernie would likely not be a big fan of some of today's spoiled, multi-million dollar professional athletes. He would, however, have likely been a fan of guys like Jack Youngblood and Walter Payton. 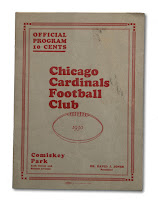 When Ernie joined the Cardinals in 1929, the Chicago Bears were the talk of the town. Having defeated the Cardinals several years in a row, even with Nevers, the Cardinals always played the role of the underdog when they lined up against the Bears. Ernie, however, had other ideas. Pro football in the 1920s was a different animal. The saying "three yards and a cloud of dust" wasn't popularized for nothing as there was very little passing. While many ball carries attempted to elude defenders, Nevers ran over them. "People used to say I should try to avoid getting hit," he once said, "but that wasn't football to me. What it was all about was making a tackler know you were around. That was what football was meant for - contact. I guess I got the greatest satisfaction out of popping a lineman - you know, really laying into him, and then going on to somebody else. That's what I loved the most." 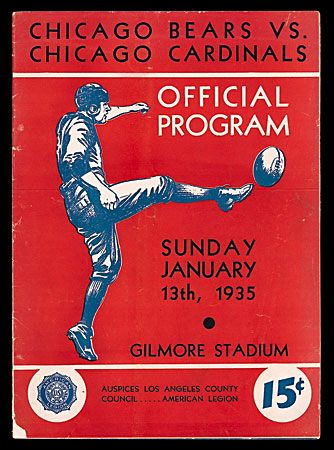 This is the kind of player, past or present, that makes NFL defenses very nervous. Famous sportswriter Phil Berger tells it this way: "Everybody in Comiskey Park the afternoon of November 28th knew what would happen. Very simply, Ernie Nevers would try to destroy the Bears by himself." "I don't need to tell you about Nevers," Bears Coach George Halas told his players. "If you stop him, you stop the Cardinals. But it isn't going to be easy. Don't be content with hitting him and relaxing. That's when he'll get away. Hit and hit and hit. When he's on the ground, then you'll know you've stopped Ernie Nevers. And not until then."

That afternoon in November, 1929, 8,000 fans stared in disbelief as Ernie dismantled the entire Bears' defense. The record books say he ran for six touchdowns and kicked four extra points. There had never before been a rushing performance like Nevers' on a pro football field. In the stands that fall afternoon in Chicago sat Knute Rockne, the legendary coach of Notre Dame, along with his team. When Nevers trotted off the field, Rockne turned to his players and said "That, gentlemen, is how to play tough football." For Ernie Nevers, it was the only way.

Ernie Nevers played for the Chicago Cardinals until 1932 when he mercifully stopped battering opposing defenses and hung up his cleats in retirement. That same year, Dr. Jones sold the team to Charles W. Bidwell, Sr., a wealthy Chicago businessman, for $50,000. For the next 15 years, Bidwell watched glumly as the Cardinals turned in one miserable season after another. In seven of those 15 seasons, they finished dead last. But in 1946 Bidwell made a move that would lead the southsider's football team back to glory. That move was to bring back Jimmy Conzelman for a second term as Cardinal's coach.

From 1940 to 1942, Jimmy had coached the Cardinals to three losing seasons. But this time, the gregarious coach was determined that things would be different. "I've got a dream," Conzelman told Chicago sportswriters. "You have to have horses in the backfield, otherwise you're a doormat. I want the greatest backfield in the league, the best passers and the best runners. When I have all that going for me, I'll have the professional championship in my pocket."

At the beginning of the 1946 season, Charlie walked into Bidwell's office with a bold request: "Mr. Bidwell, give me the backfield I want, and I promise faithfully that you will have the title. It will cost you a lot of money, but I guarantee results." Thanks to Bidwell's generosity and Charlie's shrewd recruiting, the 1947 season saw the Cardinals fielding some of the biggest, fastest, and toughest men in the league.

There was Paul Christman, an All-American quarterback from the University of Missouri with a cannon for an arm. Elusive All-American halfback Charlie Trippi from the University of Georgia signed a four-year, $100,000 contract, the richest in league history. Joining them were Elmer Angsman Jr., a contact-craving running back from Notre Dame, and tough-as-nails Marshall Goldberg, who had been with the Cardinals since 1938, but was just realizing his potential.

Together, Christman, Trippi, Angsman, and Goldberg made up the unstoppable running threat that Coach Conzelman nicknamed "The Million-Dollar Backfield." When the 1947 season opened, the Cardinals attacked their opponents very much like their ill-tempered namesake, with a blinding offensive attack the likes of which the NFL had never seen before.

Even the mighty Chicago Bears, who had bullied the Cardinals for years, fell 31-7 to the overpowering running and passing assault of the Cardinals. 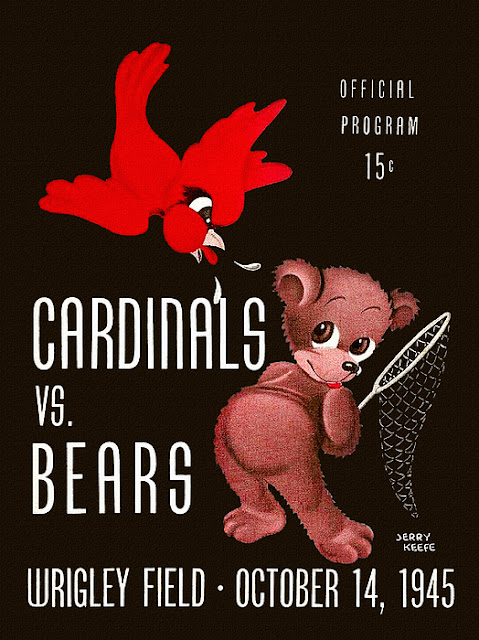 On an icy, wind-blown day in 1947, the Cardinals met the Philadelphia Eagles in the 1947 Championship game at Comiskey Park on Chicago's south side. Philadelphia Coach Earle "Greasy" Neale, a hard-nosed tactician who always had a few tricks up his sleeve, devised a seemingly simple plan to stop the Cardinals. He would bolster his huge defensive line with two extra players and meet the Cardinal's "Million-Dollar Backfield" head-on.

On offense, Neale would send out Tommy Thompson, a passer with deadly accuracy, to connect with Pete Pihos, Philadelphia's sticky-fingered wide receiver. If the Cardinals keyed on Pihos, Thompson would hand off to Steve Van Buren, considered by many to be the league's premier runner.

As sound as Neale's strategy was, neither his game plan nor the efforts of the Eagles' players could halt the determined Cardinals as they played the game with the memory of team owner Charles Bidwell, who had died earlier in the season, weighing heavily on their hearts. They also played with the unpleasant memory of those seven last place finishes, as well as for the loyal Cardinal fans who had stuck with their team throughout the dismal seasons of the 30s and 40s. When the final gun sounded, the Cardinals flocked together in celebration in the middle of the field. They had defeated the Eagles 28-21 to win the championship. Throughout Chicago, Cardinal fans reveled in their victory long into the night.

After winning the 1947 championship, the Cardinals entered the 1948 season with the same personnel and the same goal -- winning the championship. After winning 10 games in a row, they again faced the Philadelphia Eagles for the NFL Title. However, this time Philadelphia's Steve Van Buren was the hero when he broke a scoreless tie with a fourth-quarter touchdown, sending the Cardinals to a 7-0 defeat. After the season, Jimmy Conzelman resigned, and the Cardinals began a downward spiral that lasted for several years.

While not on the plus side of the win column during those years, there were lots of fireworks provided by one of the greatest running backs the game has ever seen: Ollie Matson. In 1952, the Cardinals made Ollie their No. 1 draft choice. In 1951, as a senior at the University of San Francisco, Ollie led the collegiate ranks in rushing, average yards per carry, and touchdowns.

He was a superstar on a dominating team that included future NFL players such as Gino Marchetti, Joe Scudero, Ralph Thomas, and Ed Brown. Ollie played in the East-West and College All-Star games, and when the season was over, ran third in the Olympic 400-meter run and also ran a leg on the 1600-meter relay team. There was no doubt about Ollie's ability to run, and in his years with the Cardinals he gained a reputation second only to the immortal Jim Brown. So immense was Ollie's talent that when the Cardinals finally traded him to Los Angeles in 1959, the Rams gave up the rights to nine players in return. 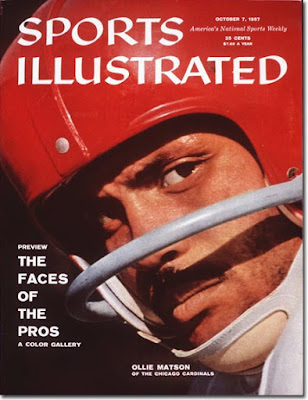 Sadly, it was in 1959, with the advent and threat of the American Football League that the Cardinals left Chicago and headed toward St. Louis and eventually their home in Arizona.  The Cardinals themselves are the reason why the AFL was created, for after tiring of trying to repeatedly purchase the Cardinals and relocating them to Dallas, Lamar Hunt founded the new league, thus ushering in the modern era of professional football in the United States.

During their stay in Chicago, the Cardinals called the following places home: 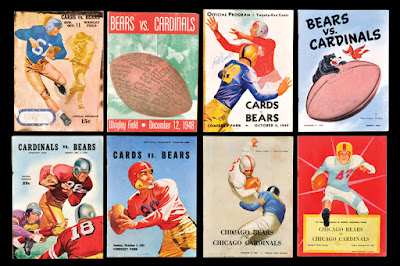